ESPN columnist and Boston sports fan Bill Simmons recently wrote about the boring nature of the 2010 Boston Red Sox. The factors he listed were:
For the last point regarding the length of games Simmons provided data on game times through eight significant seasons, starting in 1975 and running through 2010.  Generally data mean more to me when presented visually, so I plotted them on a bar graph (less the incomplete 2010 season).  Note the ever-expanding purple bands, which denote games that lasted between three and four hours.  Not shown is that through 101 games in 2010, the Red Sox have played one (1) game in less than 2:30 hours.  Maybe I was spoiled by watching a number of Greg Maddux's two-hour masterpieces in Atlanta, but this is absurd.  Bud Selig would do well to adopt a few of Simmons' suggestions. 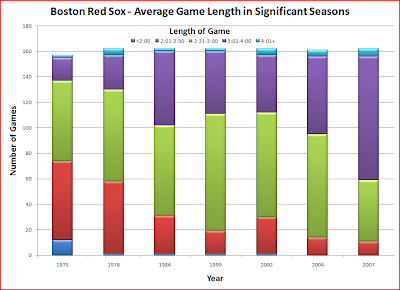